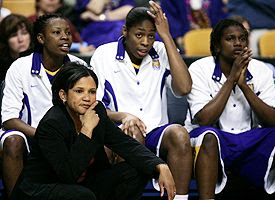 Pokey resigned as the head women's basketball coach at Louisiana State on Wednesday after the university became aware of an alleged inappropriate sexual relationship between Chatman and a former player on Chatman's team, sources told ESPN.com.
The university, the sources said, learned of the relationship from an employee within the basketball program. It was unclear when the alleged improper conduct took place, but when asked if it had occurred while the player was a member of a team coached by Chatman, a university source said, "that's my understanding."
The 37-year-old Chatman, who initially revealed plans to quit after the postseason, said she will not coach the Lady Tigers in the NCAA Tournament. In a statement released Thursday afternoon, Chatman said: "My resignation yesterday has prompted speculation and rumors that far exceeded my expectations and it is clear that my presence would be a great distraction during the NCAA Tournament."
to the Final Four both years.
In 2005, Chatman received a four-year contract extension that paid her close to $400,000 annually, plus postseason bonuses ranging from $15,000 for making the NCAA Tournament to $70,000 for winning the national title. The highest-paid coaches in women's college basketball, Pat Summitt of Tennessee and Geno Auriemma of Connecticut, both earn more than $1 million per year.
Publicada por Mário Silva à(s) 04:26